In Pt.2 we mainly focused on exception handling.

In this third part we will start converting Hindu-Arabic numbers to Roman numbers.

Convert numbers from 1 to 5

Let’s start by creating a brand new describe section in our test file:

For any number we want to check both the value returned by toInt (Hindu-Arabic number) and the one returned by toString (Roman Number).
For number 1, we will test also its string form ‘1’.
Let’s insert our six test cases inside our new describe section:

We need a big refactor in our code. We need to add two static methods to check:

Then we will complete or public methods toInt and toString

In the end we will rewrite our library constructor to make use of our new methods:

As you can see, inside the block of code executed when the value passed is a valid int, we added also the controls to convert the numbers from 1 to 5.

If we check now these new tests, we will have a correct result:

Let’s see what happens if we try to test the number 49.

As expected we have an error because we never handled any two-digit value: 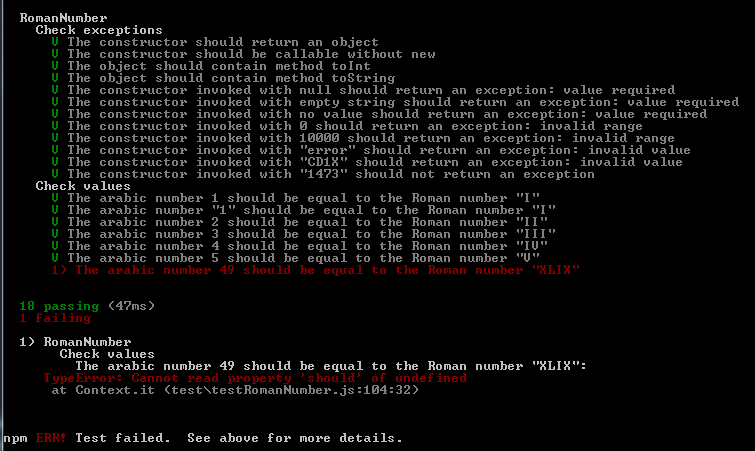 This function computes ones and tens values from the input, and then it handles them separately to get the appropriate Roman symbols (See how the case 0 is never handled because we have no Roman symbol representing it).

…and all the test cases will be passed!

We’re now ready to go and convert any Hindu-Arabic number.

We need to enhance the static method intToRoman to handle the hundreds and thousands too:

Now let’s check what we accomplished so far, by typing:
$ npm test

Even though our intToRoman method performs correctly, it really needs refactoring (for style’s sake).

The idea is to group the Roman symbols, based on the ones used for ones, tens, hundreds and thousands.
In fact, the pattern used is always the same: it’s just the symbols that change.

Here is the final version of our conversion method intToRoman:

If you just relaunch the tests, you will see that any of them is correctly passed.

Even more to come (we’re going to make it)

In Pt.4 we will complete our library by adding conversion facility from Roman numbers to Hindu-Arabic numbers.